here is some of my privilege.
I believe they were thinking of me
wearing myrrh and adorned in silver
and that is not selfish
we share the same sun
– the kiss on our skin
we share a love of puzzles
– arrangements of letters
we turn into poems – plays – books – speeches
and laughs.

Like Loading...
here is some of my privilege.
I believe they were thinking of me
wearing myrrh and adorned in silver
and that is not selfish
we share the same sun
– the kiss on our skin
we share a love of puzzles
– arrangements of letters
we turn into poems – plays – books – speeches
and laughs.

You are
the idea the African saw through the cracked wood of
the Henrietta Marie
You are
the seed of the new woman
the ecstasy in the fire
the gospel after poetry venues
praised on sidewalks and parking lots
you are now a prophet amongst preachers
burdened with the beauty of the entire rose
pick the thorns or keep them
just stay in tact / you came prickly and prissy
with a rampant river under your feet
your commitment will be constantly tested
through people using revolution to work our personal
problems
they’ll say you don’t fit the role / don’t look natural / ain’t ready to fight
you’re not committed to the destruction of the system
and they’re right
because you are a Creator / never forget that
You are a Creator
and you destroy the idea of death in order to live.

Years ago I decided I would not never become a teacher. I envisioned it as confinement. I am a creature of routine BUT I do not want one imposed on me. I always saw being an educator as someone who was doomed with routine and rewarded with low pay. That was not the life I wanted to live.

As time and the ancestors would have it, my poetry created a platform for me to engage my art at colleges and universities. Not just as the “entertainment” but additionally as an educator to young writers on the importance of preserving the black vernacular. My art eventually evolved to focusing on the feminine narrative. Encouraging the black feminine voice expressed and written from a holistic perspective and not just as a presence to move a plot forward. These discussions exposed two things, (1) I had more questions than answers and needed to do more research to educate myself (2) I was pretty good at this teaching thing.

My community knows me primarily as a performance poet and from the theatre. Both of these creative platforms allowed me to express undivided and intellectually intact. I had the company to be beautiful and the security to laugh at myself and others. As I immersed myself more with the writing community, plays and novels, I felt absent- invisible even. I was stifled with this feeling once before when I studied film at Howard University for my M.A. In screenplay writing, I didn’t have the company of voice, meaning the character written or represented on film, was not a bridged visualization of my existence as a woman. A black woman, a woman of color living in this country. My questions about the presence or the acceptance of what was represented as the black feminine narrative, now became a plaque of concerns. That was until I got my hands on Toni Morrison’s “Playing in the Dark: Whiteness and the Literary Imagination”.

END_OF_DOCUMENT_TOKEN_TO_BE_REPLACED

I was introduced to her work during a book club I was a part of when I lived in Los Angeles years ago. The book was, “My Soul To Keep” –

First of all, even with all my theatre and poetry literature knowledge, I did not know of any black women that wrote in this genre. So not only was the book AMAZING, I was intrigued that our storytelling entailed this! I credit Due with broadening my curiosity on this genre and re-thinking/re-reading Octavia Butler. I had only read Butler’s “Kindred” at the time but now I dug deeper into both of their works. Thank you Tananarive Due! 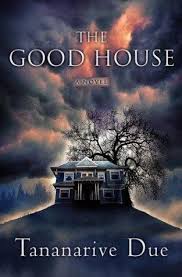 HANDS DOWN!!! Like Butler, Due is probably writing before her time (for us right on time) and later down the line her work will be considered for more television/film production. Until then, Happy Birthday and we honor you!

Thank you for everything!

Get your copy of my new collection of poetry/prose, yardwork, today.

here is some of my privilege.

I believe they were thinking of me

wearing myrrh and adorned in silver

and that is not selfish

– the kiss on our skin