One of the roles of the artist is to re-create life’s perception within a societal context. Some say the conditions of the moment define the creation of art through political, cultural and religious/philosophical terms. With that, there will always be an audience for our voices, so why do we torture ourselves with endless edits and insecurities of not being artistically accepted?

So many of us sit surrounded by genius pieces of art inspired by our immediate communities. Award winning poems and best selling novels. We have garage spaces and storage units full of paintings and sculptures that depict an opulence of emotions. And the fear of our vulnerability being labeled as weak disables us from sharing. And the masses of our culture in the states does not support our profession so we get a “regular job”. And turn our passion into a past time or extra way to make money.

Everyday of the week. In every situation in life. The individual in the position to persuade or that perceived the story will always have an audience that understands and supports them. As artists, we have to identify when in our lives we began to believe no one would appreciate our art and stop this. Because no matter what the discourse is from the expression, it will be perceived by someone that understands and folds our endless nights.

elaine brown is particularly known for her involvement in the black panther party in Oakland, Ca. while many haven’t had interest enough to read what her contributions and positions were in the party, they seem satisfied with knowing and saying, “she’s an ex-panther.” I had the privilege of meeting her twice and opening for her during a lecture in los angeles a few years ago. she was very emphatic with her intent to tell her side of the story. to make sure we left her with more to say.

she wanted us to know she believed in the black panther party with her entire being. she helped the panthers set up its first Free Breakfast for Children program in Los Angeles in addition to the panthers Free Busing to Prisons Program and the Free Legal Aid Program. she had a progressive intent for her people and herself as a woman/spiritual being. in her book, A Taste of Power, she made mention that she eventually left the panther party because she could no longer tolerate the patriarchy and sexism.

and I remember her speaking of love. I remember her sharing personal photos of her and Huey P. Newton and talking about how much she was in love with him. as I was holding one of the photos, she pointed to him and said, “he was fine wasn’t he?” her entire face smiled.

some days I feel like elaine brown in wanting to be whole. wanting to be accepted as an intelligent and critical thinker as well as a lover. and for all of who I am to be safe enough to share as part of the human experience. 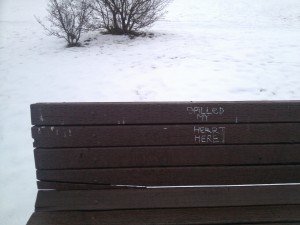 I spilled my heart here.

and in gym during 6th hour.
and in the parking lot of Dairy Queen.
and on the phone when long distance calling cost extra.
and I meant every word I said.

and for you I’d do it again.
for your smile.
for your time.
for the exchange of our secrets.

in the name of love.

I have been inside of my head for almost a month now. (translation: my nieces and one of my nephews are visiting with my sister, their mom, and their dad.)  When I came to the realization I would move down south to get custody of them, I made conscious decisions to listen to the silence of my Inglewood apartment.  I would lay in the bed and watch the sunrise chase the stucco across the ceiling.  I would pull my bedding to the couch and then lounge upon rising from my slumber with a cup of coffee and a movie from my dvd collection.  Time would be timeless and my day would plan itself.

Fast forward to five children: my calendar is full of their appointments and activities.  Waking up to their breakfast requests, me needing to be judge for who can watch their tv programs first.  In many ways I am more involved with my breath (purpose) versus chasing my daily goals.  There is nothing wrong with ambition at all but I suppose when it’s  yours,  you don’t see the immediate results.  Now, with the children, I can see daily the effort of my breath.

I can see smiles of accomplishment on their faces.  I can see their sweat overcome defeat.  I can hear their laughter break through their fears.  It is immediate gratification everyday.  The current silence of my home is nostalgic to my creative life and purposeful meditation.  But I must admit, I look forward to seeing “the efforts of my breath” soon.

2008, I packed up my single life in Los Angeles and made my trek to Atlanta to get custody of my sister’s children.  Her five children.

I made this privy decision after the second girl was born in 2004.  When “it” was now apparent in my mother.  I could hear “it” in her voice.  But “it” was loudest in her silence.  The flat breath that would catch happiness and linger trapped between her sighs.  My mother not being able to enjoy the fruits of being a grandmother because she was in a position of subordination to being a mother all over again.   Her angered disappointment, which is different from both anger and disappointment.  Her thanksgiving needing to be a holiday of receiving.  Our conversations gave guilt to the quiet jazz filled afternoons in my LA apartment.  Our conversations consistently robbed Roy Hargrove and I of the enjoyment of our new bottle of chilled riesling.  I needed to resolve.  The options: the kids become wards of the state or raised by my mother, who had become quite lenient with her home rules and expectations.  Foster care had already been in the picture.  The kids had already been split up before.  The boys stayed together but the oldest girl, only five months old, was sent to be cared for by another family.  Stories formed with the youngest boy being mistreated by another child in a foster home.  Stories of the kids crying at the end of visitations upon not being satisfied with the answers they received to their inquisitons, “can I come home yet?”

I wanted to create another story.  Help write another ending for them.  After all, intergenerational family rearing is nothing new to most cultures.  Even my grandparents’ modest three bedroom home had ever revolving doors to their nine children and 17+ grandchildren so this decision seemed natural for me too.  But like most, I presume, who choose this, we do not see the stories that await us.  The stories of the hard adjustment to living in a new city, the demands of your time (or what used to be), the depression, the anxiety, creating a personal/social life with five kids, dating, finding the “mommy button” and the arduous task of re-membering who I am and re-inventing my self as a woman, artist and active aunt of five.  Some stories are funny and some are serious.  From journal entries to day to day tales, this blog is about me going from zero to five in 32 hours.