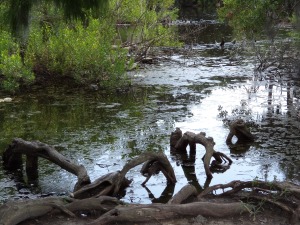 The boat whistled its’ way through the waters and soon the screams of the women faded. The air was now filled with the constant yells of families sitting on roofs screaming for help.  They approached Memorial Medical Center and Chris decided to seek refuge there.  As he got closer, he could see through the lobby window hundreds of people camped inside.  Every seat was occupied and people were sprawled out on the floor with blankets.  Police were patrolling the doors.  Chris knocked but the policemen just stood and shook their heads in the negative.  Chris trudged through the water to the other side of the hospital and policemen were standing heavy guard at those doors too.  He knew besides the sore bones and loose teeth, he had no serious injury and they were not going to let him in.

Chris double tied his bag of food and treaded through the water on his tippy toes.  He began to reminisce on the summers growing up in New Orleans.  His father worked as a mechanic in a neighborhood shop and in the summer Chris would help out by washing the cars once he was done.  Afterwards, instead of joining his cousins down at the local swimming pool, he hung out with the neighborhood knuckle heads and smoked weed.  Or they convinced one of the older drunks to buy them liquor.  He was all of nine years old.  With the water slapping up against his chest and occasionally splashing in his face, he wished he had taken those swimming lessons instead.

A few blocks from the hospital, Chris found himself pacing in the water side by side with a dog.  The dog was a dark brown cocker spaniel probably looking for a dry place to rest his feet.  From atop, the dog seemed to be relaxed.  But he knew underneath he was probably  paddling his legs wild as the devil!  Chris remembered how easy it was to tread the dog paddle when he was younger so he picked his feet up to give it a try.  He quickly dipped in the thick, murky waters and emerged panicked.  He struggled to get his stance stable but soon regained his pace and continued down the street with the other stranded people.