Please enjoy the analytical critique from a student playwright on my play, Hope’s Return.

“Hope’s Return is very relevant to the society we live in today. This play discusses several “back seated” issues faced by a different generation today such as: mental disease, funding higher education, realities of war and our government, depression and even suicide that threatens our younger generation. Although fictional characters were used to create this play, the topics heavily relate to the reality of society in the 21st century.

The characters face harsh realities but eventually trail by the end. Hope, the lead character, is similar to many people in my generation. They try to survive in the work force by different means. Many times we are not prepared mentally for the harshness of how inside management works. This is particularly true for women who find themselves lost in male dominated fields. Vergie represents many mother figures who hope the best for their children. However, being pre occupied with tending to other’s needs can leave your own home in shambles. Sometimes your ears are so deaf and eyes so blind you cannot sense the disarray. El is an excellent example of a true provider and backbone for his family during economically hard times. He may not have been the most tender when it came to Lewis’, his son, poor behavior, but particularly gentle yet stern as his role of father and husband. Lastly, Lewis can fit the description of most young adults who’ve lost their way. Most are always ambitious but not able to get a foot planted in the ground to be successful without their parent’s aid. It seems as if Lewis is always judged by his family based on his past failures instead of his current attempts of success.

END_OF_DOCUMENT_TOKEN_TO_BE_REPLACED

I am still floating on a cloud where dreams come true…

My art interest started in theatre, as an actress, back in elementary school.  That interest eventually led to writing, in several genres, and performance in poetry or oral tradition of interpretation.  I wrote, produced and directed a one act play in Los Angeles a few years back and I did the same for a one woman show in which I portrayed, Afeni Shakur, the ex-black panther and mother to the late Tupac Shakur.  Anyone can be a playwright by simply writing a play.  My goal had always been to be contacted by a theatre company and sent a contract to collect for Royalty Fee’s.  That finally happened to me in August 2015 and it has been a surreal journey up until the other night when I was handed the tickets and program to the production of my play, Hope’s Return. 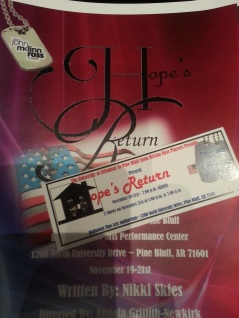 A few years back, I read an article on LaVena Johnson.  An African American soldier who had just graduated from high school in Missouri and enlisted into the army. After only serving eight weeks in Balad, Iraq, Johnson became the first woman to die in Afghanistan or Iraq from the state of Missouri.  Her family was notified that her death was ruled a suicide from a gun shot wound to the right side of her head with a M-16 rifle. Upon her family viewing the body, the gunshot was on the left side of her head along with a black eye, broken nose, several missing teeth, scratches and teeth marks on her upper body, her back and right hand burned, her vaginal area bruised and lacerated and lye had been poured into her vagina.  The Army ruled her death a suicide in 2005.