Easily one of my new favorite quotes:

“You have to live at the edge of your capabilities.” – Will Smith 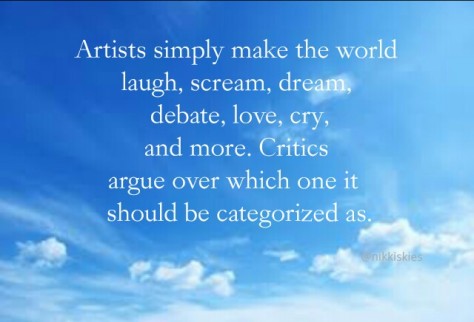 we declared ourselves artists
and we spoke paint and poem / dance and drums
made HIStory and HERstory relevant next to fish and broccoli
fed and fast / we believed in beliefs.

dream.believe in the flow of your blood.and the loud slurs in your garden.
we have stories to write.8counts to prance.rhythms to flow.
we must remain uncaptured.
love,
Nikki

some days I feel like ntozake shange. in the most simple sense of what EVERY artists dreams… to have a timeless piece of art that can transcend across generations.

her award winning play, For Colored Girls Who Have Considered Suicide When the Rainbow is Enuf was first produced off broadway in 1975. it moved to broadway and continued to win awards and marked her place in the literary world. some 35 years later, this same play was turned into a movie. timeless art… this play is rich with emotions and complexity. shange’s work is also where I learned the literary style of writing and performing prose. my all time favorite, ellington was not a street.

I always say, ‘I want my art to be able to live without me. To feed my children’s children.’ 39 years after it debuted in new york, her play, ‘for colored girls’ is currently being produced on two different stages in atlanta, ga. some days I feel like ntozake shange and just trust my heart through my pen. trust that this is the piece of art that will transcend time. 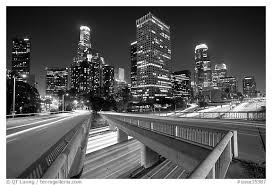 I feel part of the smaller story. I feel part of the larger story. Skyscrapers are like small cities with thousands of people that live and work there. Their foundations and superstructures provide different appearances. These tall buildings are seen as symbols of power and greatness. They are improved in live time to stand the test of weather and the moods of mother nature. Yes, some days I feel like a skyscraper… especially when I began spoken word in Los Angeles.

It was clearly the congregated movement of griots and sages before us that declared the time again. Only the shadowless and their corners really thought “they started something new” or “took it to the next level”. Only time would be able to determine those thoughts just as the medu netter has spoken for centuries in the pyramids. Only time, still will reveal that.

One would have thought the time was 1961 and women were still only allowed to be house attendants. When in fact it was 2001. Writing and performing poetry was not new to me. I was shocked that it was being critiqued and shared in seemingly ‘non art environments’. Coffee shops, lobbies of recreational centers, after hours at businesses and theatres in need of publicity. The art form was taking on a new timeframe and would need new walls to hold it’s voice.

In an already big city. A city with the most highly structured designed skyscrapers, one would think she could just pick up where June Jordan left off. Just take the notebook from Gwendolyn Brooks and turn the page. But it wasn’t like that for Jaha Zainabu, Bridget Gray and Rachel Kann, my “come up” crew. None of us were novices to the arts. Together we were decades of stories, poems, lectures, theatre and visual art. Together we split the city and nestled our art amongst those who neighbored our homes. We supported our venues week after week and then by bequest, politics were engaged in our arts but this time the agenda was to undermine. From history our community arts had a focus of meeting weekly to “build and feed each other”. These new politics were of division because all of us would not be able to eat. In fact, it happened so fast we weren’t even able to decide on our seasonings! And many owned microwaves and had never lit a stove or practiced patience with a crock pot. But she/we stood there.

One would have thought it was 1961 they way we were over looked to perform feature poetry shows. One of us was even told, “women can’t hold the audience attention to do a feature segment”. And week after week, we went and supported the self served. And we began to see the bending of the art. This was called open mic, to disavow the necessity for us to hold one another accountable. We were allowed to do and say anything and not read or study and some times not even demanded to practice. Our art scene became like loose, dangled dred locs from an unhealthy scalp. Her voice strewn like sidewalk abandoned Christmas trees. With the desperate opportunity for manhood to be demonstrated, she/we were overlooked. It was not 1961.

Now about this, She was given the mic and then cut short by loud music playing in the background to a host dancing behind her begging for a laugh and a few smiles. She wasn’t given the same time limit, as he. And She, was given time on the stage to express her newest and most intimate poetry piece. She was accepted by the audience with warm applause and finger snaps. Capsized with emotion, she stepped away to gather herself only to have the host scold the audience clapping for her by saying, “We don’t do that here”. And then She, was too serious and her voice was too loud. “You should write some love poems”, he declared to her after she received thunderous applause when all night he received scattered rain drops. And then She, was a performer amidst reading writers. And while both are styles of interpretation, it distinguished her natural flame to a fire and cast her away feeling lost and unheard.

And she/we were paid less. And she/we were heard less. And then one night we all talked. And we almost cried. And we all had the same story and we all reaffirmed it wasn’t 1961. And Rachel decided we should do our own. And we did. And we sold out a night club on Hollywood Blvd with an all female poetry feature show. The first of it’s kind during this wave of poetry in Los Angeles. And we ate. And then our four corners of the city saw what we were made of. That temblor thwarting technology that doesn’t fall during earthquakes. That strong wavering skyscraper that houses thousands of people working and living with stories to tell. 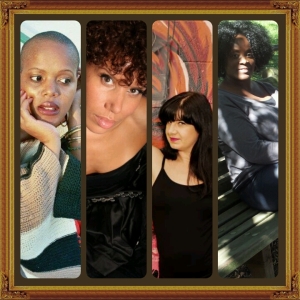 You are the thief of truth. You pretend to make me strong when in actuality you supply me with debilitating thoughts. You cast my feet in promise with a mixture of rocks and mud and you tell me I am “where I’m suppose to be”. So I wave bye to love and water to remain the intelligence you have attached me to.

Your understanding of me is just an illusion. I cannot stand in an understanding phase when it should be digested and turned into wisdom. I should flow. Attachment, you are a thief that has kept me stagnant and I now rebuke you.

I have been inside of my head for almost a month now. (translation: my nieces and one of my nephews are visiting with my sister, their mom, and their dad.)  When I came to the realization I would move down south to get custody of them, I made conscious decisions to listen to the silence of my Inglewood apartment.  I would lay in the bed and watch the sunrise chase the stucco across the ceiling.  I would pull my bedding to the couch and then lounge upon rising from my slumber with a cup of coffee and a movie from my dvd collection.  Time would be timeless and my day would plan itself.

Fast forward to five children: my calendar is full of their appointments and activities.  Waking up to their breakfast requests, me needing to be judge for who can watch their tv programs first.  In many ways I am more involved with my breath (purpose) versus chasing my daily goals.  There is nothing wrong with ambition at all but I suppose when it’s  yours,  you don’t see the immediate results.  Now, with the children, I can see daily the effort of my breath.

I can see smiles of accomplishment on their faces.  I can see their sweat overcome defeat.  I can hear their laughter break through their fears.  It is immediate gratification everyday.  The current silence of my home is nostalgic to my creative life and purposeful meditation.  But I must admit, I look forward to seeing “the efforts of my breath” soon.

even back then I knew I would have a lifestyle in the arts in some form or fashion.  capture the stares of strangers and live in the heat of the light.  a bit more relaxed now.  not as serious.  still believe that voice in my head and that message in my heart. – Photo by Lydia Douglass-Cordova