This is like seeing an evening rainbow after an afternoon of thunderstorms. Like, listening in a comatose stance to the radio hip hop mix and then coming alive when some old LL Cool J comes on!

This one is definitely a song to dance to with your children! My girls and I have claimed this as our summer song! We dance and sing in the car and we don’t care who is watching!

This is perfect timing for me as I am being visited by my muse and this time around I am listening and taking care of her! Enjoy and have a good day!

My mother’s family is from Mound City and Marion, Arkansas so traveling to this area for family reunions was an annual summer event. These rural areas are the outskirts of Memphis, Tenn.

I recently went to Memphis with a woman that I have called friend for the past 29 years, Vanessa. Buddies since junior high school! Between us, we have lived in nine different states! Both of our birthdays are in July and a few years ago we decided to travel to a different city and see what it has to offer. Last year we did Chicago and just this past weekend we met up in Memphis. Now even though I have been to Memphis before, I had never been as an adult and without holding the hands of a younger cousin, etc. Once I got back to Atlanta, I knew I wanted to share photos and write about the city but then I decided I should write about friendship. 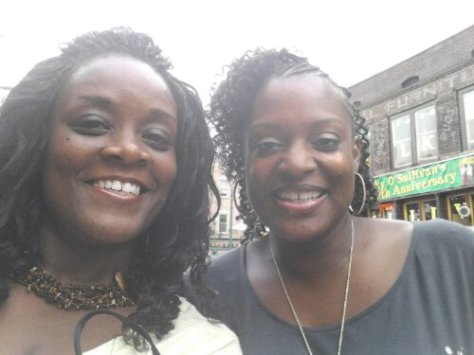 So what do we do? We laugh, eat what the locals eat, laugh, talk about our relationships (she’s actually married her high school sweetheart and they’ve been together for the past 25 years!), take a city tour, talk for hours and sleep in. I know the things I told her will stay with her and we will re-visit next year and throughout the year. She knows her ideas and thoughts are safe with me. Friends like this, don’t judge but gently persuade. When she laughs at me I don’t get offended. We don’t support pity parties but encourage each other to look to the light. To get to the point, we trust each other. Trust is what has sustained us all these years.

To all those who have true friends, time can/will get away from you so make the time to nurture those relationships. Of course you hear all these tips for your significant others but don’t take for granted your friendships. They need TLC too. I just traded in the Memphis blues to maintain some Memphis trues!

After hours of wave jumping and being captured and tossed by the tides, the kids are still wrapped in bed sheets and comforters clinging to sleep. I pray the days memories keep them warm and connected. I pray these times sustain a smile in their hearts when they really need one.

I have decided to keep the children here for the summer.  Yes, yes… I will relinquish my silent days and just have my sister come visit them sometime during the summer.  I am buying another home and I just won’t be able to juggle all the tasks that comes with that and getting them ready for school. If you haven’t done the “buying a house” process… it can be a BEAST.

So, I really needed to get away. Originally, my middle niece planned a trip to Chattanooga but then I got an inkling to be on the beach.  We’ve done Savannah twice before, we’ve been to Folly beach in Charleston, SC, and American beach in Amelia Island, Fl. I’ve heard people talk about Panama City Beach, Fl but had never gone. They were excited to go to Chattanooga but the mention of a beach sent them in overdrive! The drive is about five hours out of Atlanta which I told them we would do as an overnighter from Sat morning through Sun early evening. The timeframe didn’t seem to bother them one bit! All they heard was, “out of Atlanta” and “go to the beach”.

Panama City Beach… had beautiful ocean water! You could clearly see the three rip tides of various blue water. Not too crowded and not many children. And parking was easy and free, I like free! I like to eat what the locals eat when I go to a new city but I gotta’ tell ya’, the pickings were slim where we were. We stayed on the hotel strip near highway 231 and shopped and swam on Front Beach Rd. Not too many “local” places to choose from to eat and the one place we went wanted a RIDICULOUS $29.95 for my nephew and myself only! (I had them stop after that quote so I don’t what the cost for the girls would’ve been.)

We went to Ripley’s Believe It or Not and the kids enjoyed some go kart racing and an adventure with a haunted house. The haunted house will be a separate hilarious story for another blog! They SHUT IT DOWN! Literally… THREE TIMES! (hahahahahaha!)

Anyway, being with the water was just what this single aunt/mom needed! Some time away from my routine city and quality time with the sun. Visions of my communication and relationship building with them became more clear. A summer bucket list for me became even more clear. Beach ballin’ on a budget, ask me about it 😉