I was planning a trip to the beach. Fortunately, Atlanta affords me the leisure of choosing between various Georgia Islands, or a few hours drive to Florida, South Carolina or the coast of Alabama. I decided to do a quick turn around trip to one of the Golden Isles off the coast of Georgia. Distracted, I began to flip through Facebook and came across an article about Igbo Landing or Ebo landing.

“The Igbo Landing occurred when Igbo slaves who had taken control of their ship marched into the water and drowned at Dunbar Creek on St. Simons Island, Glynn County, Georgia.

After surviving the rigours of the Middle Passage, the 75 Igbo slaves who were bought for labour on the plantations of John Couper and Thomas Spalding for 100 dollars each.

The slaves were chained and put aboard a small ship to be transported to their destinations. During this voyage, they took control of the ship and grounded it, drowning their captors in the process.” 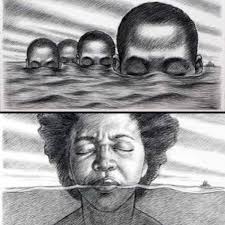 I looked up St. Simons Island and discovered it was a mere 4.5 hours away and I could choose lodging on the island or in nearby Brunswick, Ga. There are so many stories to be told. So many lands to be visited and honored or memorialized, and as a writer I believe there are always new words to discover. New smells and newly uncovered ways to describe emotions. So I booked my lodging, fueled up the Buick, and hit the road.

I hopped on a trolley tour of the island so I could hear the overall history and get around to see the island.  The tour guide was very knowledgeable and enthusiastic and stopped at various spots for us to take photos and ask questions…

As we crossed a bridge the tour guide said something to the tune of, “and across Dunbar Creek, we will find…” and then we arrived at a former plantation…

But what happened to the story about Dunbar Creek? Is there not a marker or place to stop to take pictures? Upon exiting the trolley, I asked the tour guide about Dunbar Creek and Igbo Landing. He asked me if I knew the story and I told him that was the main reason I chose to visit this island. He told me the landing was now on private property and could only be reached by boat. He also confided that one of the homes near the landing was for sale and currently empty.

I drove back to Dunbar Creek and indeed my GPS destination stopped in front of acul-de-sac of beautiful multi million dollar homes. My first string of thoughts were, “Do they know they own land that people like me would love to go and sit on? Just to be still and hear if there is a story waiting to be told to me? Do they know we pray their bodies really did take flight back to Africa?” After all, Toni Morrison, based her novel, ‘Song of Solomon‘ on the myth that after walking back into Dunbar Creek, their bodies flew back to Africa. Award winning author, Alex Haley, retold this story in his famous novel, ‘Roots‘. Haitian author, Edwidge Danticat, alluded to this myth in one of her stories in the award winning book ‘Krik Krak‘. And author, Jamaica Kincaid, also used the myth in her work. I was devastated I couldn’t visit this piece of history to say the least.

My only recourse was to get on the bridge that covers Dunbar Creek and take a burst of photos:

I later found out that in 2002, some 75 or more attendees, from the US, Nigeria, Haiti and Brazil visited Dunbar Creek and delivered a ceremony to designate the site as holy land. I found my peace in knowing this and after later viewing my photos, I discovered orbs on about nine of them. And I am okay with this 😉

Before you ask, of course I found time to enjoy the tranquility of St. Simons Island…

One thought on “vacation in history”