I have seen Alice Walker speak twice here in Atlanta. Both times, the crowd was mostly women, predominately white women. My last observation of the energy from the admiration of her literary works came during the Q and A. I remember sitting there trying to construct a precise question on how she connects her creative process with her person as a black woman. What I realized specifically is that the majority of the questions from the black women were trying to get the same information as I was and that the white women were asking her about spirituality. I remember thinking how odd that seemed to me that both black and white women seemed uninterested in the documentary that was just viewed. We wanted more and yet, Alice Walker is for the most part a fiction writer. 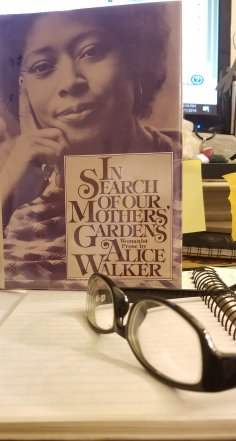 Fast forward to me now back in grad school and how often she is referenced in Africana Women’s Studies, Gender Studies and Women’s Studies. It all makes sense. My question on how she connects her creativity  and her womanhood is in all of her work. I know realize how intuitively and effortlessly this is done in her work. I’m not certain of this, but I don’t think as she sat and wrote prose, short stories or poems that she was thinking on how she could contribute to feminist critical theory or black feminist theory. Nor could she have known how her personal expansion of feminism into “womanism” would take on entire subjects. Or perhaps she did… after all she is also an essayists and speaker.

None of this would come to be if she hadn’t wrote “The 3rd Life of Grange Copeland” or paced through the harsh criticism of “The Color Purple”. If she hadn’t re-defined love differently from how society caters it on a dish to ingest with its’ uneven proportions. I was not new to the works of Alice Walker so as I have taken on my new studies in school, this time I am warranted a space to interpret her work from a ‘writer’s perspective’. I have the advantage of understanding the metaphor of her prose and connecting that in to feminist literary critic. Who knew a fiction writer could stimulate the left and right sides of the brain? That one could be boxed in as an “author, poet”, but analyzed as a social theorist.

Throughout my years of writing, in the midst of a fiction story or poem, I have felt the need to stop and “explain”. I have encountered the urge to provide background or foregoing information to ensure that it connects to an expansion of thought. Perhaps that will be my question if I ever am in the presence of Alice Walker again. But today, we honor her! Thank you!