If I could rename her, I would call her Oya.  She brought the rain/the storm/the thunder and lightening my heart needed.

I thought my womb would stretch/hips expand/body open for all my children to breath life.

I never imagined my teacher would come to me, age 11/a reflection of my brokenness/an unrelenting stare/unyielding hunger to be whole.

There was no escaping.  A time to heal had come, and so began the cycle of faith and fear.

I never imagined my daughter as a savior.  There would be nothing immaculate about her conception.  How I became a mother would be by birth.  But here she is, no marks to prove my body made room for her/to prove to my soul was given time to prepare for her. But she is here, breathing in all of my dreams as if I whispered them to her as she tossed and turned in my body.

She is a sphinx.  The fire burns but never destroys.  I have witnessed her sift through her own ashes at least three times.  For that, I do not take credit.  I am only here to remind her she has been resurrected before.

I relish in every raindrop/vigilant through every storm/faithful when the lightening strikes because I know rebirth is on the other side.  She has taught me to bury the dead/to forgive myself.  It is her grace I am most grateful for/her willingness to allow me to grow/to always allow me to hold her.  Even in the darkest hours, when our arms can’t seem to stretch around our bodies, I hold her in my heart/in my prayers.  I carry her like child in womb in my soul.

“We will give you a daughter,” they said.  “Raise her in remembrance of our bodies.  Allow her to be complex/layered/emotion-filled. So when the rain comes, she knows, it is not the end, for she will be unafraid to shed.  Show her how to listen to the thunder and give reverence to the lightening.”

“They told us to bring a picture of a woman who inspires us,” she said.  My daughter birth me into a goddess/able to be in two places at the same time/exist in two realms at once.  There I was, hundreds of miles a way, yet next to her, on stage as she began,

Lady in red, again I have witness her sift through her own ashes…. 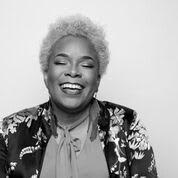 Crystal identifies as a Black Creative, an artist who creates work across multiple artist disciplines that centers on the Black experience. She is a spoken word poetry grand slam champion, published writer, actress and current cohost of Dem Black Mamas, a podcast that delves into the unique experience of Black mothers. Her recent theatre credits include, The Mrs. & the Mistress and Untitled Reconstruction Play.

Crystal was a member of the international poetry collective, Colors of the Diaspora, which was comprised of female artists from the U.S. and South Africa. She traveled to South Africa and performed in the premiere of the original multi-lingual theater piece, Colors of the Diaspora, at the Grahamstown National Arts Festival. In addition to international travel, Crystal has toured throughout the country performing her poetry at various colleges and universities, performed on world famous stages such as The Comedy Store in Los Angeles. She had shared the stage with transformational individuals such as Iyanla Vanzant, star of OWN TV’s Iyanla Fix My Life. Crystal has been the curator for countless poetry shows including the Pan African Film Festival Spoken Word Festival, which takes place in Los Angeles, CA each year.

Crystal is a contributing writer for For Harriet. Her work has also been published in anthologies, including Hub For the Holidays (2013) and HIS RIB: Poems, Stories and Essays by HER (2007). Beyond poetry and spoken word, Crystal is dedicated to pushing the community forward and amplifying Black voices. While living in Los Angeles, she worked as the Programs Manager for the Cross Cultural Centers at California State University, Los Angeles. She is the creator and director of Writers Well Youth Fellowship Retreat, which is a retreat for Black girls ages 14-19 focused on writing and performance. Crystal is also a facilitator for Speaking Down Barriers (www.speakdownbarriers.org) whose mission is to transform life together across differences by facilitating community dialogue, training, performances and consultation. She is a member of the board of directors of Hub City Writers Project (www.hubcity.org), a non-profit press, which publishes well-crafted, high-quality works by new and established authors, with an emphasis on the Southern experience. She is an active member of West Main Artist Coop, where she teaches acting workshops once a week. Crystal obtained her Bachelor’s degree in Media Production from Florida State University.